"Bunnies!!!!  Wake up!  Wake up, bunnies!  It's time for the Royal Wedding!!"  Yup, that was Mom at about 10 minutes to 6 this morning, all hoppy and excited about some sort of big wedding that was happening over in England.  Seeing as Binky is already a princess, she was up and excited too.  Me on the other hand?  As you can tell from the picture, I was still sleepy....

"Oh look!  Isn't Catherine's dress just splendid?  She looks incredible!" Mom said as she made herself comfortable on the couch.  Hey Mom, so long as you are down here, why not fill the pellet bowl....?
"Fluffy, this wedding is so exciting!" said Binky.  I had no idea she was even into this sort of stuff.  "Well of course I am!  I am a bunny princess after all...." So together we snuggled from the safety of under the coffee table to watch the events unfold.  "Look at all the hats people are wearing.  If I were at the wedding, I would wear a hat.  A pink hat.  With feathers!" Binky said.  "What would you wear Fluffy?"
"Well, I guess I would have to dress up too.  Perhaps I would don a jaunty chapeau, like a top hat!  Top hats are very sophisticated you know."
"Oh Fluffy, you would look dashing in a top hat!  Hey, where is her bouquet of carrots?  Her bouquet is just flowers.  That's so ordinary.  If I were her, I would have chosen a bouquet of carrots."
"No way, she needs a bouquet of bananas, that's what she needs!  Bananas!"
"Oh Fluffy, you're so silly.  Who wants a bouquet of bananas?  Every girl bunny knows that carrots are the hottest trend right now...."
"But bananas are timeless.  They will never go out of style."
So as we watched the Royal Wedding taking place across the Pond, we thought to ourselves how exciting it would be to actually be there, waving from the crowds, maybe even taking a ride in an open carriage while people cheered us on.  I'd be cuddling with my Binky, eating carrots.  And bananas.  She in her pretty pink hat with feathers and me in my jaunty chapeau.....
I guess this picture is as close as we'll get...... 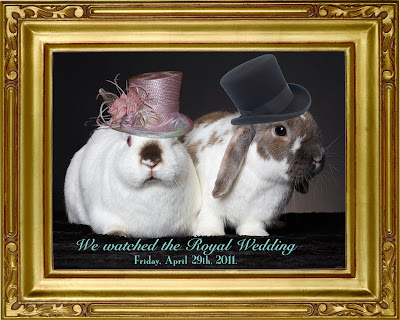 Will The Real Fluffy McFluffersons Please Stand Up

My adorableness is not in question.  Neither are my strikingly handsome good looks.  And any one of my peeps who read my blog can attest to the fact I have a pretty adventurous and fortunate life.  But no one before has ever called me........FAKE!  Until now that is.
Yes, once again, Mom's iPhone is involved.  She downloaded an app called iRate Bunnies.  Now don't think it's about bunnies who are irate because it's not.  What it is is simple, you post a picture of your bunny and others "rate" your bunny on a scale of 1 - 5.  You can also give bunnies trophies and stuff and you can also leave comments about the bunny you see.
Now the majority of these comments are typical and sweet: "You're bunny is so cute!", "I love your bunny!", "Awwww look at that face!"  Then there are the expected trolls that leave nasty comments - but we won't even give them the time of day.  Then there are the ones who Mom refers to as the "iRate Bunnies Police".  These posters accuse others of using web pics of adorable bunnies and passing them off as there own.  In many cases, this is true (Mom has seen these pictures before on the internet), but Mom is of the feeling "Who cares?".  It's iRate Bunnies, so look at the bunny and rate it.  Who cares where the picture came from, right?
ANYWAY, so this is where the problem comes in.  Mom posted pictures of all of us, even Ella who is at the Bridge, and someone, we don't know who, took a look at the picture above and called me......FAKE!!!!!  And someone else called Mom a liar!!!!!!!  Well, I can assure you all that I am not fake and my mom is not a liar - I am real in every sense of the word!  I jump in paint trays, I lurk in cabinets, I go closet spelunking, I run around the neighbourhood and I have been accused of flinging poo, although that has yet to be proven in court.....
Mom figures it's because the picture is so awesome.  Our friend Jessica took it - she knows what she's doing - and that's why it looks as great as it does.  Mom guesses they think there is no way anyone can take a picture like that of their bunnies but obviously people can, based solely on the fact that the picture exists.  Mom calls them all jealous trolls, but these haters keep hating and it's sucking all the fun out of an otherwise sweet and adorable app.
Binky and Scooter and Ella have all received similar comments.  So to the haters out there, our bunnies are very much real.  Yes, the pictures are professional but the bunnies are real and we all belong to Mom!  So quit being so nasty and just rate bunnies.
That being said, if any of my peeps here are on iRate Bunnies, let me know and we will vote high for you!  Even though, regardless of the picture, Mom always rates every bunny with 5 hearts, because every bunny in the world is adorable!
Fluffy
7 comments:

Bunny Toys and Treats! All bunny-approved, all money goes to bunnies in need!

What is it like to be a house rabbit? Who really knows? But here are some posts from my four rabbits who seem to think it's pretty cool. Well, sometimes.

Montana puts the Ain't in "Dainty" 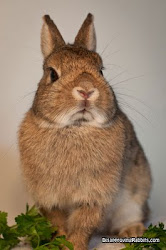 Visit BunFest! Where bunnies and people come to play.

I used to be a lonely rabbit,
Just looking for a home.
I simply had no place to go,
No one to call my own.

I wandered through the streets and fields,
in rain in heat and snow.
I ate what ever I could find,
I was always on the go.

My skin would itch, my feet were sore,
My body ached with pain.
And no one stopped to give a pat
Or gently say my name.

I never saw a loving glance,
I was always on the run.
For people thought that hurting me
was really lots of fun.

And then one day I heard a voice
So gentle, kind and sweet,
And arms so soft reached down to me
And took me off my feet.

"No one again will hurt you"
Was whispered in my ear.
"You’ll have a home to call your own
where you will know no fear.

You will be dry, you will be warm,
you’ll have enough to eat
And rest assured that when you sleep,
your dreams will all be sweet."

I was afraid I must admit,
I’ve lived so long in fear.
I can’t remember when I let
A human come so near.

And as she tended to my wounds
And cleaned and brushed my fur
She told me ‘bout the rescue group
And what it meant to her.

She said, "We are a circle,
A line that never ends.
And in the center there is you
protected by new friends.

And all around you are the ones
Who'll keep you safe and sound,
Who will share their loving home with you
Until a forever one can be found.

We will do all we can
by searching near and far,
To find the perfect home for you,
where you can be a star."

She said, "There is a family,
that’s waiting patiently,
and pretty soon we’ll find them,
just you wait and see.

And then they’ll join our circle,
they’ll help to make it grow,
so there’ll be room for more like you,
who have no place to go."

I waited very patiently,
The days, they came and went.
Today’s the day, I would hope,
my family will be sent.

Then just when I began to think
It wasn’t meant to be,
there were people standing there
just gazing down at me.

I knew them in a heartbeat
I could tell they felt it too.
They said "We have been searching for
A special bunn like you."

Now every night I say a prayer
to all the Gods that be.
Thank you for the life I live
and all you’ve given me.

But most of all protect the bunnies
in the pound and on the street.
And send a Rabbit Rescue Person
to lift them off their feet.

"Thanks for reading my blog!"